Medicare began on June 30, 1965.   It was Harry Truman’s original concept, but it was Linden Johnson who signed it into law.  The first Medicare Supplement (Medigap) plans were offered in 1980 to fill the gaps in coverage that Medicare didn’t cover.  Since that time, plans have been added, removed and modified.

How to Choose the Best Medicare Supplement Company

Decide which Medigap plan design is best for you from the chart below. The most common plans are G, F, and N. Expect higher rates for plan F because it  pays the most, and lower premiums for Plans G and N. 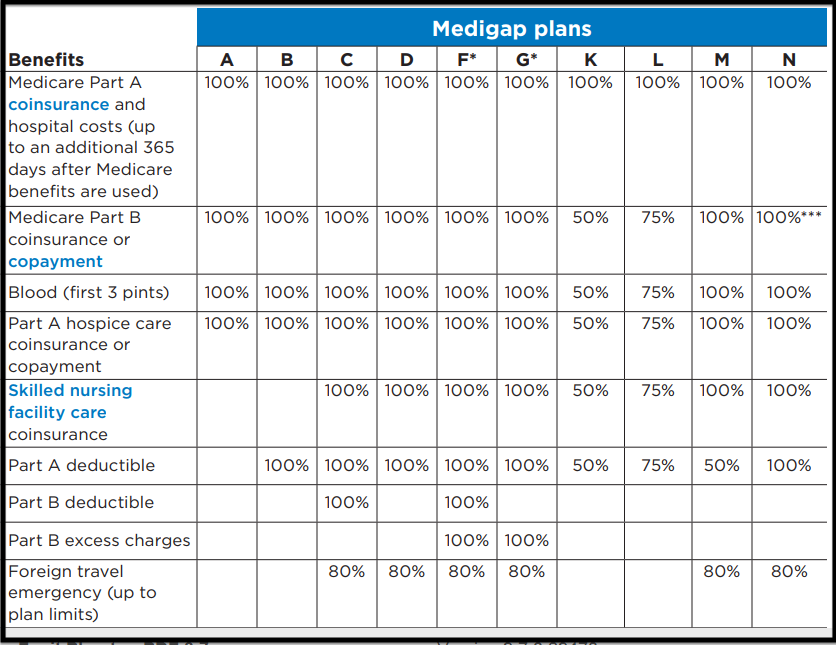 What You Need to Know Before You Buy In 1982 Medicare decided to “Standardize” Medicare Supplement plans for all companies and states other than Minnesota, Massachusetts and Wisconsin.  This took the confusion out of comparing plans company to company and simplified the process of purchasing the best Medicare Supplement for each individual.  Standardization “leveled the playing field” and helps seniors make a more informed decision and understand what they are signing up for.

When you look at a plan G with one company, you can be assured that the benefits are exactly the same when you compare the cost of a G plan with another company.  The biggest difference between one company and another is the cost, but we can help you understand other factors like past rate increases, AM Best ratings and other company trends.

The plans you can choose from now are A, B,C, F, G, High Deductible F (HDF) or  High Deductible (HDG), K, L, M and N.  Not all companies offer all the plans. Each company can choose which plans they want to offer based on the requirements of that state.  Medicare Supplements  companies will have different rates and may offer different standardized plans designs depending on your zip code, gender, age, available household discounts and tobacco use.

Plan C, F and High Deductible F (HDF) are only available for new buyers if you had Medicare part B and/or part A before January 2020.  Medicare beneficiaries that have a C or F or HDF plan now, can keep their coverage.  If you want to change companies, you can change and purchase the C, F or HDF plan with a different company as long as they offer that plan.

Current Medicare Supplements DO NOT cover prescription medications.  You should get a Medicare Part D plan separately.  In general, you need do this when you first become eligible for Medicare, during one of Medicare’s annual election periods, or when you have a life event that qualifies for a Special Election Period (SEP).  These plans are sold by companies who have a contract with Medicare to provide RX benefits, and are an additional cost over and above Medicare Part B and your Medicare Supplement premiums.

How are Medicare Supplements are Priced?

Companies can offer Medicare Supplement plans based on different ways to calculate rates. The majority of companies “Attained Age”.  It’s really not much of a choice for the consumer.  Depending on where you live usually determines what system most companies offer.

ALL Medicare Supplements can increase to an unknown amount no matter which pricing system the company uses. If they need to collect more premiums due to inflation, high medical claims or an unforeseen economic impact, your rates are subject to increase. Your rates will never go up due to your own personal medical claims, but they will increase based on everyone with the same plan and company in a specific area.

Who Can Enroll in a Medicare Supplement?

You can buy a Medicare Supplement any time of the year, but if you’re not in a Medicare Supplement enrollment period, you’ll have to pass the health questions set by each individual company.  Companies determine who they will and will not accept based on their specific underwriting guidelines.  Each company set their own guidelines and they will differ company to company. If you have health conditions, it’s all about find the companies that will approve you.

What is a Medicare Select Plan?

Select plans are lower priced supplements that but you may have to use a hospital from that company’s Select Hospital Network.  We highly advise avoiding that type of plan if at all possible.  One of the biggest reasons Medicare recipients choose a Medicare Supplement (Medigap) instead of a Medicare Advantage Plan is CHOICE.

If you you decide on a “Select” plan you must understand that you cannot go to any hospital or nursing facility that accepts Medicare in the United States.  You can only choose your doctors.  Keep in mind that if you have a condition and you were told that the best available treatment is for example the Mayo Clinic, you may not be able to go there.

Other Important Things to Consider When Choosing the Best Medicare Supplement

Fill out the Customized Quote Form to get detailed information on rates, rate increase history and A.M. Best ratings for these companies: